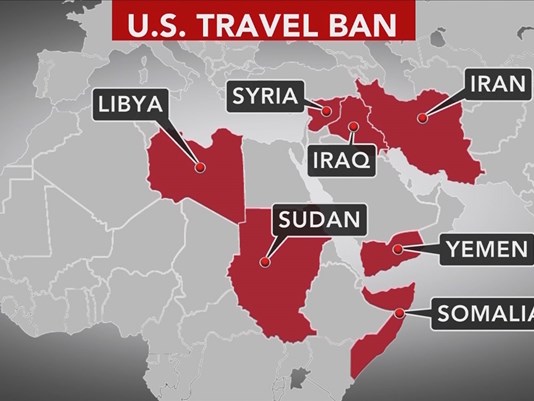 Today, on March 15, 2017- A federal judge in Hawaii blocked President Donald Trump’s new travel ban on Wednesday afternoon, hours before the ban was set to go into effect.

The ruling — which applies nationwide — means that travelers from six Muslim-majority countries and refugees will be able to travel to the US. The Trump administration took over a month to rewrite the travel ban order after multiple federal courts blocked its implementation last month. Unlike the previous executive order, the new one removed Iraq from the list of banned countries, exempted those with green cards and visas, and removed a provision that arguably prioritizes certain religious minorities.

US District Court Judge Derrick Watson concluded that the new executive order still failed to pass legal muster. “The illogic of the Government’s contentions is palpable. The notion that one can demonstrate animus toward any group of people only by targeting all of them at once is fundamentally flawed,” Watson wrote.“Equally flawed is the notion that the Executive Order cannot be found to have targeted Islam because it applies to all individuals in the six referenced countries,” Watson added. “It is undisputed, using the primary source upon which the Government itself relies, that these six countries have overwhelmingly Muslim populations that range from 90.7% to 99.8%.” “It would therefore be no paradigmatic leap to conclude that targeting these countries likewise targets Islam,” Watson added. “Certainly, it would be inappropriate to conclude, as the Government does, that it does not.”

The new ban was announced earlier this month and set to take effect Thursday. It would ban people from Iran, Libya, Somalia, Sudan, Syria, and Yemen from entering the US for 90 days and all refugees for 120 days.The White House did not immediately comment on Watson’s ruling, but the Trump administration argues the ban is necessary to protect the nation’s security.“We cannot compromise our nation’s security by allowing visitors entry when their own governments are unable or unwilling to provide the information we need to vet them responsibly, or when those governments actively support terrorism,” Attorney General Jeff Sessions said March 6.

Attorney Gasana offers a variety of immigration services in Houston, TX, including: